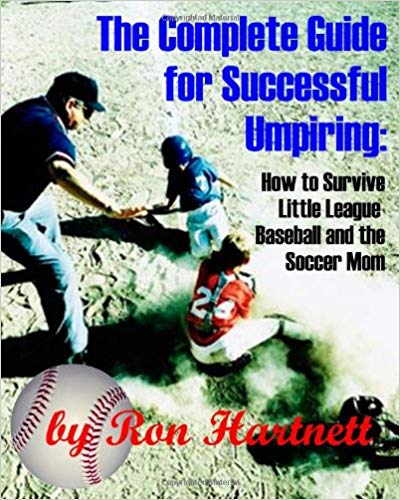 With this website and e-book, you'll find valuable and useful information. You can set your sights on not a few summers of yardwork. Working part time on the weekends, you'll find yourself pulling down some serious dough. With the critical umpire shortage you can find yourself on the field night and day.

As a handy guide, you'll find the Complete Guide is a time-worthy resource you'll turn to time and again.

Umpiring 101 — Strikes and Outs Gets You Home

Start off with the website how2umpire.com. Just a few pages, but they are jam-packed with valuable info. Learn how a few repeated umpire behaviors lets you take charge and stay in charge.

Interested? Check out the 20 chapter e-book The Complete Guide to Successful Umpiring. Tons more detail than the website, this resource shows coverage breakdown on plays you'll most likely run into. Infrequent calls like the balk or interference/obstruction are addressed in later chapters.

Teen Umps - Learning How to Umpire at the Mini-Camp

First off, there is no better way to get quick cash in your pocket than umpiring. A part-time weekend gig, you can't beat officiating the great game of baseball. For one thing, you’ve got the best seat in the house—except you have to stand.

For Bren, age 11, who jumped on the chance to call ball, this was a no-brainer. Signing up for a few meetings at KWAA (Kingswood Athletic Association) in West Omaha to what you’d call a mini-umpire camp, Brendan was behind the plate in no time. Run by a young 20-something umpire Jason with more than a few games under his belt, approximately 25 would-be umps spent two days in the gym and then two in Dave and Sharon Ernst’s make-shift ball field. They were more than a some excited to put a some cash in their pockets.

Denny's Church - Learn How to Umpire After a Few Meetings

However, mini-camp is not enough if you want to jump into the $40/game circuit of travel team and tournament ball. Showing up for two-hour Sunday afternoon umpire meetings at “Denny’s Church” in the Omaha suburb of Ralston will get you earning a few thousand dollars over the summer for part time work.

Dropping down a flight of stairs to the churches basement, you will listen to Denny as well as two former Metro Umpire protégé’s on occasion, Roy and Bill, who took things ump-wise a big step further. They are now officiating baseball on the double AA circuit.

Because Jones is the umpire assigner for virtually all the baseball games in the Omaha Metro area, everything from rec ball to the travel team Slumpbuster tournament that takes place about the same time the CWS (College World Series) is in town, you’ll be able to umpire more youth baseball games than you could ever imagine. Chip in $35 to get in on the Metro website, and serious umpire summer work is guaranteed.

Now, while I’m the first to gripe—I mean, meetings where the main course is listening to “balk” or “interference” or “obstruction” discussions—I do remember hearing veteran umpire Jerry say, “When it’s a can of corn.”

I perked up. “Can of corn? Now what the heck could that possibly mean? Suddenly, I realized that there may well be a baseball lingo, a language I was not familiar with, yet every ump knew. (A "can of corn" in baseball is when someone catches a pop-up ball. The can of corn got its name back when merchants always used to put cans of corn up on the top shelf (reason unknown) and they had to use something to knock it down and then they caught it.)

Still, there’s got to be something faster and easier than sitting through 20+ hours of meetings from January to March. Meanwhile, have umpiring be a fun time for Bren, not a parent-yelling hassle.

I mean, it doesn’t matter if the players are 9-years-old, just starting baseball; parents and coaches take each game seriously. The pressure on umpires is often true: be a 100 per cent then make steady improvements.

Break Through - How to Learn How to Make the Strike Call

So, to help out, jot a few things down. Yet, this is much tougher than I thought. Only after I watched fellow umps, watched Bren umpire T-ball, dissected my own games, what went right, what went wrong, did my notes become a book. A lucky break? Break it down to plate and base mechanics. As school administrator, I explored the How-to of successful teacher behaviors in the classroom. This became the How-to of successful umpire behaviors at the game.

I also liked what Metro Umpire Chief Denny Jones said at one meeting. “Umpires try to get that Zen Strike Zone. You know, when everyone’s happy. Players, coaches, and fans know what pitches will be a strike, what pitches won’t.”

Of course, no one is perfect. Sure, you’ll miss a couple pitches. Just remember, err to the strike!

Let’s cover a few things before the next two pages get down to the nitty-gritty of plate and base mechanics.

Next, given that 2/3rds of the time, for the base umpire, it’s a ground ball to short. This becomes the How-To for the successful base umpire. The first play in the infield belongs to them. 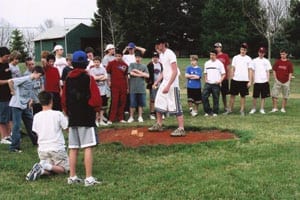 Time is on Your Side; Yes, It Is

Then, as I dug deeper into the How-to of diamond success, watching other umps, I realized that baseball has no scoreboard of periods or quarters that start and stop. The umpire (amateur umps are called Blue) has the only clock:

A simple mechanic. He just raises his right hand:

Indeed, when Plate Blue’s in the grid, the groove, he’s the conductor of the symphony orchestra in the Field of Dreams. 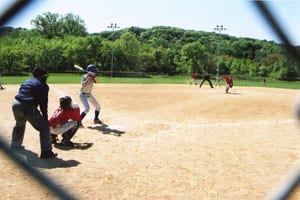 What a strong power-grid, I realized, Blue’s ability to start, stop the game. Then, looking at the OBR, Rule 4, “Starting and Ending a Game,” I read that when the lineup cards are exchanged, the Umpire-in-Chief, usually the plate umpire, takes control.

This was a revelation and a blessing. It was up to my partner and me how the game would be conducted. For instance, if it started to rain, I could say, along with my partner, when play would stop, play would resume, game canceled, etc.

On the other hand, if I didn’t like the way the coach or player was acting, I could toss them. Blue Power also extended to the stands. If there were hecklers, boo-birds, they also could be ejected.

Of course, you can’t have rabbit ears, listening to sideline chatter from fans. However, you want to have, as the OBR puts it, “Proper conduct of the game.”

On close plays, especially for the base umpire, U2, called “bang-bang” or “banger,” in baseball speak, you sell the call. Make it with confidence, make it with pride. If you look like you know what you’re doing, give the call with certainty, with a splash of bad cop, coaches and fans back off.

They give you the benefit of the doubt.

Plus, it helps to look like an umpire…from top to bottom. Everything from your shoes to your cap. 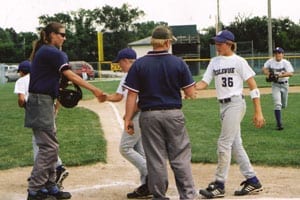 Umpire gear might run you close to $200. However, if you’ve got six games for the weekend, you’ve covered the costs. Plus, as a private contractor, all of this, along with meals and mileage, can be deducted.

Now, before we dive in into the mechanic’s nitty-gritty, let’s look at a few actions that set you above the rest.

Always use your left hand. Leave the right hand free to make the out call.

If you feel like the regular cap you have is too long to easily strip, get one for the plate—it has a shorter bill.

In general, the drill for stripping the mask is easy. It becomes automatic:

Again, always use your left hand to strip the mask. The right hand is for throwing the hammer, the “You’re out” call.

Top Tip:  Bring along a small folding chair to sit on while you gear up in the parking lot.

Below is a list of umpire shirts, typical buying sequence, as you update your wardrobe on the Little League diamond:

Top Tip: Many umps have all the shirt colors. Try to make contact the day before, decide what colors you’ll wear. If no contact, just have all the colors on hand. Shirt match-up is easy.

By now, you are dressed for success!

Arrival time (get there 30 minutes early)

Responsible for the conduct of the game

Stands behind the plate

Makes all decisions on the batter

Base umpire. Responsibilities during a game

Makes decisions on the bases

Aid plate umpire in every manner

No runners on base in the A Position

Catch or no catch

In play or out of play

Get a good line of sight

Exit the ballpark with your partner. Say thank you if told by coaches or fans you did a good job.