While Rule 4 of the OBR states that the umpires “are in charge of the playing field” (4.03e), there are times—close games, highly competitive teams, tournament contents—when situations during the game can start to get out of hand: coaches confronting, fans yelling, what does the Umpire do? Ideally, after there's a warning from the Umpire, the coach will stop. If not, he should be ejected.

The best time to talk to the coach is between innings: just pull your lineup card out of your pocket and pretend you’re examining it. Fans therefore, don’t see that you’re having a discussion regarding coach or crowd behavior.

For sure, other than the above, it’s good to have a few tips in your back pocket. Like Dave Ernst, whose two sons 9 and 11, played travel-team baseball, and whose barn and field area were used for four sessions of tween umpire training as noted, the overriding concern is the umpires’ being in control, being in charge.

“The three most important things I think the umpire has to learn? Control the fans, control the coaches, and hustle.”

Still, while these are valid comments, and look good on paper, what helps the young umpire, New Blue, is taking the game under his direction. The minute he steps on the diamond for a day of yard work he is ready to umpire. Things can start out smoothly with a solid plate meeting with the coaches:

a. This is when you get things rolling, where you spell out your expectations.
b. “Coach, I want players hustling on and off the diamond.”

c. “Coach, I have a wide zone. Not crazy wide, but wide. I want them swinging the bat.”
d. “Coach, if you have any questions, please talk to me between innings.”

I will admit, I was pretty chummy with skippers when first starting out. However, this ingratiating behavior might come back to bite you. If the coach you had made fast friends with thinks you missed a call, they’ll instantly be in your face. Smiling and joking pre-game becomes a chink in your armor.

Same with fans. Ignore them. They are all smiles and good time until the call goes against their team. Plus, fans will automatically assume you’re playing favorites.

Finally, the only person you talk to is your partner. Period. After the game is over, exit together—just like you entered—through the winning team’s dugout.

III. Skipper Comes Out to Argue.

We can round this out with a definition from the OBR: Rule 9.02(a) Any umpire‘s decision which involves judgment, such as, but not limited to, whether a batted ball is fair or foul, whether a pitch-is a strike or a ball, or whether a runner is safe or out, is final. No player, manager, coach, or substitute shall object to any such judgment decisions.

Samples when other umps think skippers have crossed the line (2018 Umpire Forum)
If I see the 3rd base coach coming down .I would give him the stop sign. I would say, "Coach we;re not having any more of this discussion.

A Few Stop-Gap Measures Many Umpires Use: 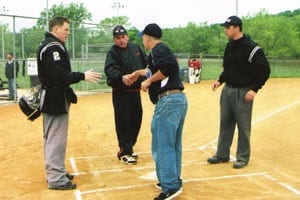 Take Me Out to the Ball Game

Umpire’s communication signals
The count: do not flash it around the infield. Give the count directly toward the mound and hold it long enough for the pitcher to see it. 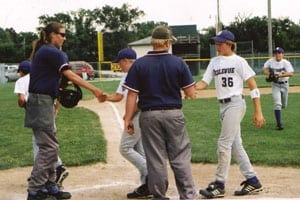 2. The non-verbal communications are given in the form of hand signals and should be given whenever there is a change in base runners or the number of outs. When there are no runners on base (i.e. the base umpire is at the A position) no communications are used prior to the pitch. Hand signals are first used after a batter/runner is safely on base and prior to the next pitch. The home plate umpire should initiate the communications sequence. Following the end of the previous play as the base umpire assumes his new position, the umpires should make eye contact and the plate umpire should give the appropriate hand signal for the current number of outs and the anticipated movement when the ball is put into play by the batter. The base umpire should echo the hand signals given by the plate umpire unless signal given is inappropriate for the current situation.

3. The approved hand signals are as follows:

4. The hand signals along with verbal communication that are used while a fly ball is in flight or during plays are: